Of course the sport didn't suddenly materialise, and there is no doubt that there were many forms of football being played both in the Australian colonies and around the world. Association football (soccer) and Rugby Union were yet to finalise their rules and were all part of the melting pot of football concepts. All these football codes are cousins and owe their origins to games played for centuries before that, in particular in England but many other examples exist in other countries.

These sports clearly influenced Tom Wills and his compatriots when they formulated the rules of Australian Football, though presumably they were also basing them in part on the games already being played locally. However in addition it has been postulated that the indigenous game of Marn Grook was also a major contributor to their ideas. Wills, as well as having grown up exposed to Aboriginal culture in Victoria, also spent most of his teenage years being educated in Rugby, England. The game of Marn Grook reportedly involved kicking around a stuffed possum (other descriptions also exist), and the arguments for and against it being an inspiration for Aussie Rules are discussed on this Aboriginal Football website (including fascinating and extensive articles).

The above site quotes Richard Thomas, Protector of Aborigines in Victoria (1841), as writing in his 1848 book that "The men and boys joyfully assemble when this game is to be played. One makes a ball of possum skin, somewhat elastic, but firm and strong. The players of this game do not throw the ball as a white man might do, but drop it and at the same time kicks it with his foot. The tallest men have the best chances in this game. Some of them will leap as high as five feet from the ground to catch the ball. The person who secures the ball kicks it. This continues for hours and the natives never seem to tire of the exercise".

A potentially important new discovery has been made by Museum Victoria, with an image created from German/Victorian scientist William Blandowski's 1857 observations of Aborigines seemingly kicking a "ball" with an upward trajectory, towards another group that appear ready to catch it. Dr Patrick Greene, Museum Victoria's chief executive, said that "We're suggesting this could be the first image of football in Australia" and "We're encouraging debate on this and if anyone can come up with earlier images".

The etching was created by German artist Gustav Mutzel in 1862 and was found in a portfolio of prints from Berlin during research for a Blandowski exhibition in Mildura (country Victoria). A report says he "took his observations back home to Germany where he instructed Mutzel to etch the Aborigines playing football". Furthermore, there were accompanying notes describing the game of the Yerre Yerre people near Merbein in Victoria's north-west, and stating that "The ball is made out of typha roots - it is not thrown or hit with a bat but it is kicked up in the air with the foot" and that the "Aim of the game: never let the ball touch the ground".

It seems there is ample evidence that indigenous men played a game that had strong similarities to the original forms of Australian Football. There are many who embrace the romantic notion that our game was thus a fusion of English football codes and a traditional indigenous sport. It's a nice idea, but one that will be very difficult to prove. But so too it will be difficult to disprove - in the meantime we can continue to enjoy the thought that Australian Football truly is a fusion of cultures appropriate to Australia when it is at its best.

An interesting footnote to all this is that the South Australian National Football League (SANFL) claims on their website that football was played in Adelaide in 1843 (just seven years after European settlement). We did query the SANFL's 1843 claim but they didn't offer any evidence. Presumably this demonstrates the difficulty in distinguishing between the existing games of football and the emerging specific sport of Australian Football, which in turn has dramatically changed over the last past one and half centuries.

The full image, courtesy of Haddon Library (University of Cambridge) and with the assistance of Museum Victoria. 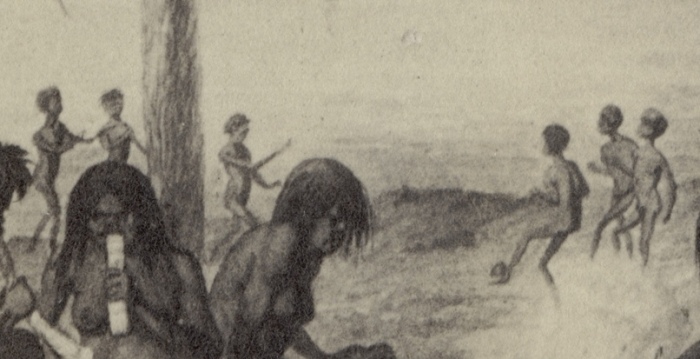 A close-up of the possible football scene (courtesy of Haddon Library).

The image was uncovered by Museum Victoria curatorial staff during research towards Blandowski’s expedition to the Murray 1857, an exhibition celebrating the 150th anniversary of the expedition showing at the Mildura Arts Centre from 21 September to 21 November 2007.