Sadly for Manchester the event had to be moved and West London were able to come through, offering their venue at Chiswick Park. It's been a tough year for the Mozzies as the normal Regional League has been in hiatus due to off-season changes. Their President, Kat Conner, told WFN that "Due to the rain our pitches and also our back up pitches were flooded", as pictured below. The decision was made on Thursday to give the BARFL a chance to find an alternative and for clubs to change their arrangements. There wasn't much improvement by Saturday so the shift to London was a wise choice. Conner said "On a lighter note the Mozzies are hoping to organise a September AFL Carnival in Manchester".

Unfortunately with the sudden venue change it also meant the Manchester team couldn't make it down to London to compete. Similarly Scotland, which normally enters a team and was set to go again, was unable to get their side down because of the considerable extra distance at the last moment, though they told WFN that they appreciated the efforts from Manchester to give them as much warning as possible. The two other notable absentees were North London and Wandsworth. The BARFL's Martin Smith explained that with injuries and other commitments the clubs decided not to enter in 2007, though several North London players were keen and filled in for other sides. 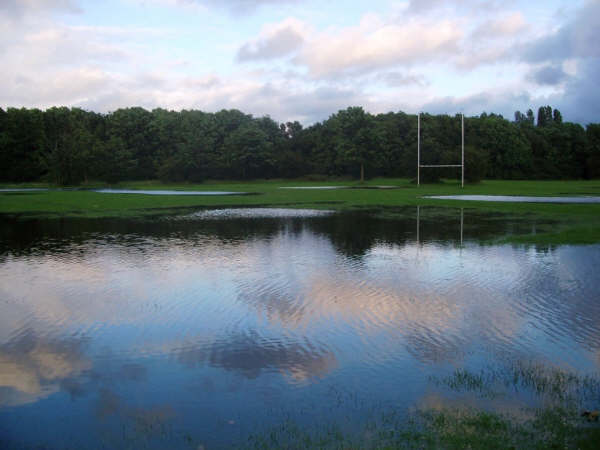 The flooded fields in Manchester, the intended location of the 2007 Brit Cup (photo courtesy Manchester Mosquitoes)


Nevertheless the tournament still drew seven teams and they were split into two pools. The InLondon Swans apparently brought along a big squad including some of their new recruits from the ARUK Southern League. Of particular interest was the attendance of a Welsh team sent by Aussie Rules Wales. Although not affiliated with the BARFL, the team attended on invitation, combined with their rivals in the local Welsh league, the Swindon Devils. Although there's a long way to go before the BARFL and AR Wales are likely to reach any formal agreements on future structures, it's very heartening to see them cooperating and getting their players on the same field. This is probably best summed up by a player from the Welsh side who logged onto the BARFL's chat forum as "cardiffpanther" to say "guys as a member of the aussie rules wales side that played on saturday, can I just say it was a pleasure to play amongst some of the best eu players in the country it can only be good for aussie rules in wales, we sure learned a thing or two!".

Early reports suggest the Welsh did not disappoint, particularly given most of their players may well be in their first season of Aussie Rules. They even secured a draw against eventual runners-up Nottingham. Aussie Rules Wales official Bryce Stone told us that "I think the Brit Cup this year (being my first) was good for our British players to get a run and test themselves against some of the best in the country". He was generally pleased with the tournament, commenting that "the feedback I got from the WAFL players was mostly positive. They had a great time being part of the first ever representative side from the WAFL" (the Wales Australian Football League). Stone had a few suggestions for improvements and gave us a detailed report, so we'll follow that up with a separate article. Something his side would definitely have appreciated was a scoreboard, especially in their tied match against the eventual runners-up. "In the game against Nottingham the WAFL Devils thought they were one point up and were protecting the lead, and after the siren we discovered the scores were actually tied. This lead to WAFL Devils missing out on the finals by one point". Alas missing or malfunctioning scoreboards aren't uncommon in amateur footy in Australia either, and the incident brings to mind the AFL match between Port Adelaide and the Western Bulldogs last week. The Power drew to within a kick of the Bulldogs and "rolled the dice" trying to score again quickly, not realising there was still five minutes left, only to have the Bullies rebound and win comfortably (the media quickly latched on to this when one of the Power's stars appeared to blame the loss on the club's runners for not informing the players). More information and photos courtesy of the Welsh in the next few days.

In related news the author of the UK Footy plan we reported on earlier, Glen Ocsko, has told WFN that he has been encouraged by the BARFL's own plans for a way forward in Britain, and clearly there is now worthwhile dialogue between them. Let's hope the positive vibe continues and everyone gets pushing in the same direction, whatever that may be.

On to the results, and after the round robin games the two pools finished in this order:

The semi-finals saw the second ranked sides play off against the top ranked from the opposite pool. The winners then played off in the Grand Final.

West London, the unexpected hosts, proved too strong for their regional counterparts, taking home the prize for the second year running. You can read the BARFL's full report on the day, with photos, at Brit Cup 2007. 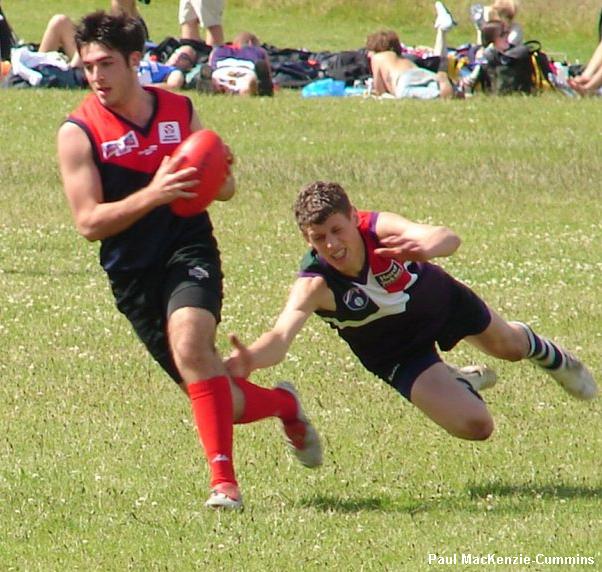