The New York Magpies and other organisers of the Australia Day longest kick competition, featuring NY Jet and ex-Geelong AFL player Ben Graham, have released further information on the locations and details of their contest. 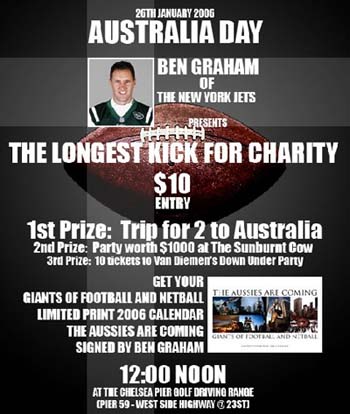 A calendar has also been produced in collaboration between the Sunburnt Cow, Operation Oz Kids, The New York Magpies, Bondi Fish and Chips, and The Manhattan International Netball Club (MINC). It can be seen at http://theaussiesarecoming.com. The majority of the proceeds are going to the needy charity http://www.operationozkidsusa.org.