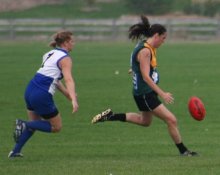 The USAFL National Championships in Milwaukee earlier this month was a huge weekend for footy in the land of the “stars and stripes” for not only the tremendous organizational efforts by the host club the Milwaukee Bombers but also it gave genuine notice that women’s footy had also found a place in the USA. The inaugural National Championship for Women’s footy took place with what was hoped to be four teams but ended up with three. However the intensity and desire for success was still very evident with the prestige of being crowned the first ever USAFL National Champions on the line.

It truly was an amazing sight to see the three women’s teams from Atlanta, Arizona and Florida squaring up for a 9 on 9 version of the game on its own separate field at the Milwaukee Polo Fields. It was also a credit to all involved and especially the USAFL for harnessing the idea and promoting women playing the game in the USA. The Atlanta team was given the biggest chance of success bringing 12 players, many of which played in an exhibition game at the previous nationals in Atlanta in 2004 and had been hooked since. They had been training off and on since May. The Arizona team was made up mainly of girls new to the sport and although there had been a history of games in the west versus a team that was no longer, the OC Bombshells, the current Arizona girls had not played in many of those matches. The Florida Fusion as they were called were drawn from far and wide with the most players from a Florida squad that had been practicing for a few months and other players from around the country looking for a game. Players from the Milwaukee area that were originally going to play in their own team were also split into the Arizona and Florida squads for the good of the sport. 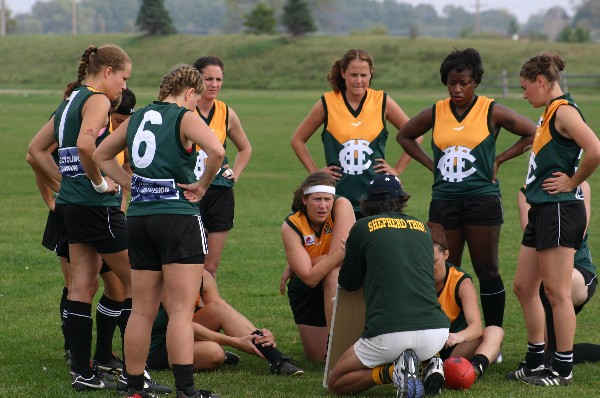 Saturday morning the first game was Florida v Arizona and from the first bounce it was easily noticeable that these girls had come to play. The taller stronger and faster line up of the Florida Fusion were too much for the inexperienced Arizona team and they ran out easy winners by 71 points. Later in the morning the Florida Fusion faced the Atlanta Lady Kookaburras in a terrific battle. There was no holding back in this game as both teams seemed evenly matched. Atlanta having a little more run and skill capitalized on their forward moves and squeezed out their first win of the championships by just 4 points. The day wound up with the Arizona girls having to front the Lady Kookaburras, thankfully for them the Atlanta girls had left their goal kicking skills at the hotel otherwise the score could have been ugly. The game however was an excellent exhibition with the kicking to position, handballing and toughness at the ball a delight to see.

That win meant the Atlanta team was through to the final on Sunday with Arizona and Florida having to face off again Sunday morning for the other spot. That game won easily again by Florida but it did mean they were to play their fourth game for the weekend in the final against a fresher Atlanta squad.

The final was a great game of footy, fast with plenty of skills and hard knocks. There is no doubt all that watched were surprised by the standard of the contest and the intensity to which it was played. Atlanta got their kicking for goals sorted out and moved to a handy lead with the aid of a light breeze at half time. The second half was a battle of the backlines which saw Atlanta stand firm and with a very consistent spread of players throughout their team they were able to hold on and win comfortably in the end by 29 points. You could use several cliches about this event but when it was said and done the girls had an absolute blast playing the game, making new friends and hanging out with the 700 guys at the event a tournament bonus. Out of all the players that ventured to Milwaukee for the women’s event they came from 10 different states in the US so perhaps much bigger growth of women’s footy is just around the corner. Here’s hoping!

Atlanta Lady Kookaburras USAFL National Champions in 2005 - who will it be next year.

For more on women's footy in the US, see www.womensfooty.com 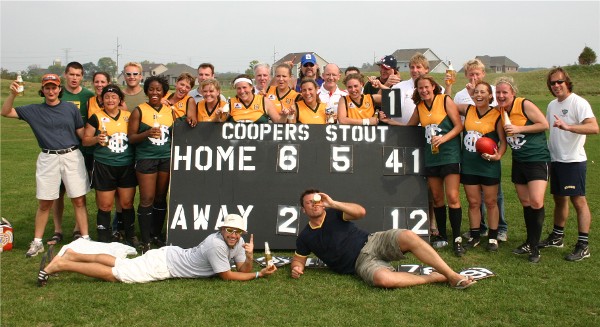