Talk with Cadzow and Yangomina

Papua New Guinea boasts the biggest Australian-football playing stocks of any nation outside Australia, but fell one step short at the 2005 International Cup. Their real strengths lie in their junior programs, with a burgeoning squadron of players in the age range of 12 to 16 years and 80% of their 2005 International Cup squad under 20 years of age. World Footy News spoke with Andrew Cadzow and Walter Yangomina about where the next step will take the footy scene in PNG. Pictured is 2005 Captain Rex Leka.

AFLPNG General Manager Andrew Cadzow has been around the development area of footy for a while, working extensively in Queensland as well as Papua New Guinea. 'The 2005 squad is very interesting in that the majority of them are in the 16 to 20 year old age bracket. This is aiming for the future rather than in the short term... next time the cup comes around we might have a group of about half a dozen players out of the current squad who form the nucleus of the team, with some of the current 14 or 15 year olds filling the rest'.

The Mozzies were very good this time around, but lacked the strength and height of New Zealand key position players in the final. Experience-wise the players have improved greatly from time spent in the AFL Queensland or some even with AFL clubs - and this is hoped to increase. Cadzow is hoping for around 6-8 players in the AFL Queensland, building on the experience of those currently playing in the AFL Cairns or those such as Alestar Sioni who have trained with AFL clubs. 'The next step is for us to take on Aboriginal sides from northern Australia, the AFL Cairns, come to Australia each year rather than every three... We are also hoping to compete in the AFL Queensland state under 18 championships.'

Media interest in PNG was high during the cup, the Mozzies getting a week's worth of back page coverage in the local newspapers - awareness of the code in PNG far beyond what most of the other nations competing in the International Cup enjoy at home.

Still, work on the ground remains to be done. Whilst there has been significant growth in regional areas right across the nation, Aussie Rules programs are still very much at developmental stages and the vital resource of personnel is the biggest hurdle to be overcome. The AFLPNG are currently looking at avenues through AUSAid and the Australian Federal Government whereby development staff could be posted in remote areas of Papua New Guinea to keep development moving.

Money is always an issue, but if the clubs of the AFL can start to see draftees work their way into the system in the next few years, there could be a definite incentive to increase the financial commitment to the structures in place.

Two clubs have already taken a gamble on Papua New Guinean rookies, Brisbane trialling Alestar Sioni and the Sydney Swans taking on Walter Yangomina for a training session over the summer following the 2002 International Cup. Both players represented PNG at the 2005 cup, experience gained in the environment of a professional club in Australia invaluable in flow-on effect back home.

Yangomina's stint with Sydney ended with a knee injury in January 2003, but he's keen to see contact continue. 'Players come back with different experience, different ideas and it flows on to the rest of the organisation. There are so many guys here with the potential to do it, you give a 14-year old in PNG a footy and they know straight away what to do with it. The game suits Papua New Guineans.' 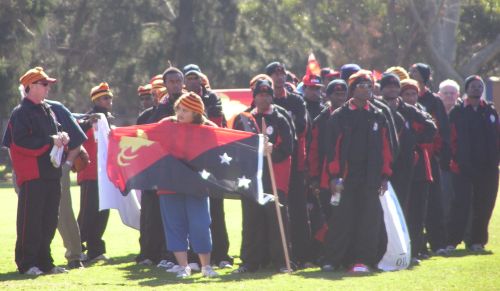