In the late time slot of the first day of the 2005 Cup, at Aanenson Oval, one of the fancied chances Papua New Guinea found themselves in a titanic struggle against the pride of Samoa. It wasn't until the closing minutes that Australia's northern neighbour pulled away to a narrow win as the rain came down.

The match was played in initially fine and sunny conditions, and it was clear early that the result would go down to the wire. Many of the Samoan players now play in Melbourne suburban leagues and not once did their players display awkward styles. Matched to that was superior body size and strength, and the fleet-footed Mosquitoes were in trouble. Also detracting from the PNG game was an obsession with chipping the ball short or taking on a tackler. Perhaps this was in response to the aerial supremacy of Samoa, but it prevented PNG from getting full advantage from their possessions. With less than a goal in it with only a few minutes remaining and rain starting to fall, players from both teams pushed themselves in a desperate battle. Perhaps the conditions helped PNG as the ball came to ground and their quick players swarmed on the ball and the Mozzies kicked the last three goals to win by 17 points - a margin that masks the true tightness of the game. Despite heavy rain, after the match players from both countries embraced in a great show of the spirit of the game (captured below by Troy Thompson). 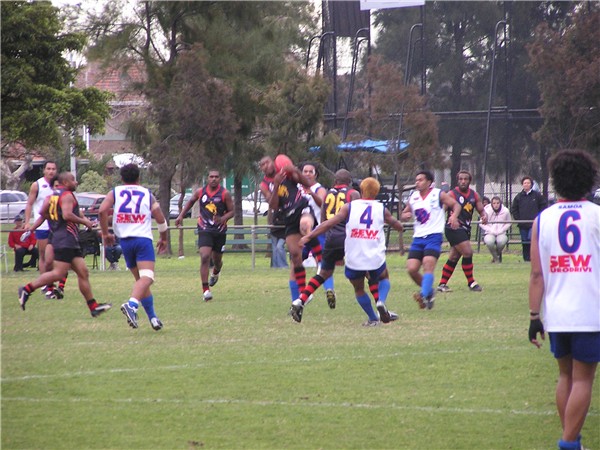 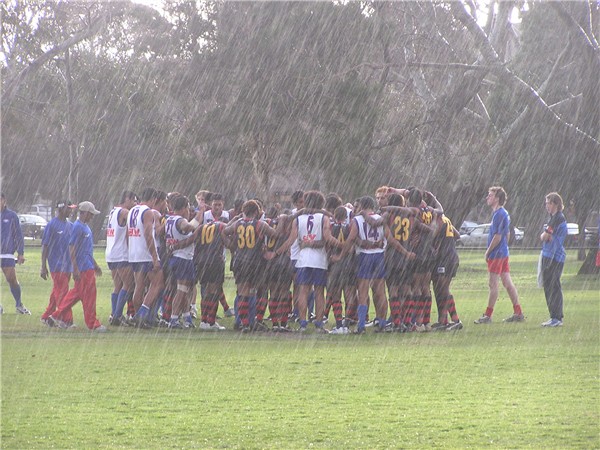