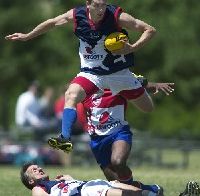 Early reports are that the United States East-West All-Star event went well, with the East winning the All-American match and the West winning the All-Stars. Critically, tournament hosts Dallas were in talks with the All-Sport Television Network's filming crew immediately before the weekend, indicating the broadcast of matches is on track.

The USAFL's three year deal with ASTN is the source of huge excitement and potential for the game, but several aspects have concerned respected people in the game. So all concerned watch with baited breath, hoping everything continues well and local US footy begins appearing on screens across the US.

A crucial step was last weekend with the filming of the two East-West games, which showcase the best talent in the United States. One match sees the very best American players from the two sides of the country face off. We understand that the East won that battle comfortably. The All-Star sides, with the best Aussies and Americans playing, also front up in the highest quality match state-side for 2005. The winners were the West. The matches also help the US Revolution selectors make their final choices.

Unofficially it was said that Dallas had met with the production team from Dallas (Pixel Cuts) and Don Wilson, the head of ASTN, who flew out to Dallas for the weekend. Apparently they taped an intra-squad game to "get a idea of what it will be like this weekend" and they "will be bringing minimum of 7 or 8 digital HD camera's to the game, with one main camera up on a raised platfom from the back of a production vehicle. So that is all coming togther nicely". The matches are supposed to air "3 or 4 times each in the coming 6-8 weeks".

Full reports on the matches will be available from the Dallas Magpies website.