The Japan Samurai and a South Island New Zealand side have battled it out in a tight contest at Optus Oval in Melbourne, Australia.

The Japanese side had a terrific 4-1 record on their tour, defeating Singapore, a Howlong selection (from the NSW Riverina region), a Box Hill North selection, Vietnam Melbourne and losing to Ocean Grove by 13 points. Although their opponents were not their clubs' full strength teams, those that saw the Samurai in 2002 were left with no doubts that the 2004 team is set for a much stronger performance in the 2005 International Cup.

In their final tour match they came up against a worthy opponent in a South Island New Zealand squad. Based on the Eastern Blues club, the Canterbury AFL's reigning premier, the Kiwis were keen to make the most of their big moment on Optus Oval. The pseudo-international was played as a curtain raiser to the Carlton versus Melbourne match on August 21st (possibly Carlton's last home game there), and did not disappoint. In a see-sawing contest, key weapons for the Japanese were their fitness and speed, while the Canterbury squad (pictured, courtesy of the CAFL website) had superior height and accuracy in front of goal. At the final siren it was the New Zealanders sneaking home by 2 points, in a great advertisement for the international game. In next year's International Cup, New Zealand will field a side from all the county's leagues, and Japan will also be stronger, with more players available. 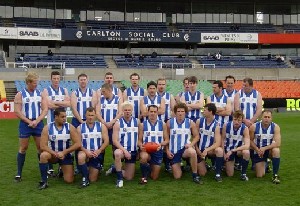